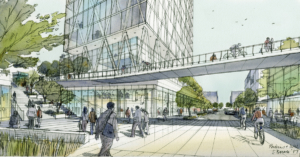 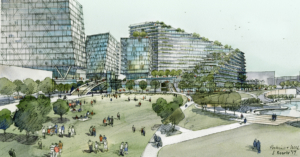 Wedged between Historic Fourth Ward Park and the Atlanta BeltLine’s Eastside Trail, the site (tentatively called “760 Ralph McGill”) had been owned by Georgia Power for more than 50 years, used for staging and storing vehicles and materials. New City bought the property in October for $34 million, and Irwin recently unveiled the first renderings for what it could become: a $750-million, mixed-use hub of glassy, uniquely geometric architecture that incorporates terraced roofs, green elements, and elevated “flyover” bridges that would ferry walkers and cyclists from the BeltLine, through the project, and down into the park.  This is absolutely one of the most important pieces of property in the City of Atlanta as “New City” owner Jim Irwin suggests.  We agree.  This property links existing neighborhoods and new development properties off Ralph McGill  and ushers visitors, commuters and Beltline traffic into the heart of the park where many festivals and concerts have debuted the last several years as well as the infamous repurposed Ponce City Market from the historic Sears southern distribution center.

Click the link below for the full article from Atlanta Magazine January 2018.

Looking for Something Specific?